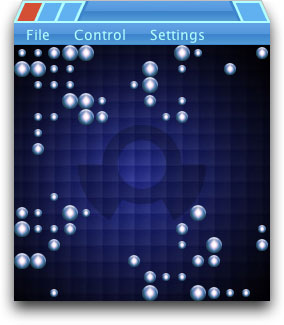 eVita is a program for computer science students or fans of cellular automata (CA) such as Conway’s Game of Life. It is open source and highly extensible. New rules may be easily programmed into eVita for you to create your own CA. New “skins” can be added to alter the appearance.

What is Cellular Automata?
Cellular automata, or CA, is, simply put, a system of cells where at every step a cell is on or off depending on the value (on/off positions) of its neighbors. In Conway’s famous (and deceptively simple) game of life:

Cosmic-scale possibilities.
If a cell’s state is determined by a 3×3 grid of cells (the middle cell being the cell we are examining), then that state is determined by 512 (29) different configurations. Therefore, there are 2512 possible different production rules! In base 10 that is a number with 154 decimal places (reader exercise: why 154?); That’s much more than a googol (10100)! With that many possibilities, Conway’s Game of Life can’t be the only interesting rule out there.

Variations
eVita comes with CA rules of production in addition to Conway’s Game of Life. For example, “Island” turns a cell on when five or more of it’s neighbors are on. This rule produces island areas when the initial conditions are filled at 50%. “Unstable Island” is just like “Island” except if there are no active cells in a 3×3 window, it is turned on, if there are all active cells in a window, it is turned off. The great thing is, we want for you to come up with your own rules to see what interesting results you can produce!

Download:
eVita is a Java application, so it should be able to run on any platform with a Java Runtime Environment .